For many centuries, porcelain was transported to Central Asia along the great silk road from China. It was called “chinni”(Chinese) here. Later, in the 19-20 centuries, there were dishes of Russian porcelain factories. 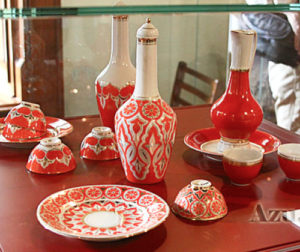 Only in 1953, the government decided to build the first Central Asian porcelain factory in Tashkent. Its task was to provide dishes for all five republics of Central Asia.
They built a factory in the old city, on the old longest street Sagban.
Specialists of famous porcelain enterprises from all over the Union helped to launch the factory. And he began his work with the production of forms and models, which were shared with them by experienced factories. After some time, the Tashkent porcelain factory formed its own group of talented artists and technologists. Production is fast enough to go completely new unique models.
In accordance with the instructions of the President, in order to restore the operation of the plant, Alokabank implemented a project totaling 87 billion soums. The unused facility was reconstructed and additional buildings were built, and the Chinese company ” Huanggang Huauao Zhongbo Clin Technology Co. Ltd.” installed the equipment. More than 300 jobs were created. The factory annually produces 30 million pieces of kitchenware and Souvenirs. One hundred percent use local raw materials. Replacing imports, products are also exported to Russia, Ukraine, Georgia, Azerbaijan and Central Asian countries.
Tashkent porcelain factory produces a variety of modern kitchen porcelain dishes that compete with the latest world standards and quality. A successful combination of professional experience, creativity, and attention to detail makes “Tashkent porcelain factory” one of the leaders in the production of porcelain tableware. Thanks to our modern production technology and a creative team of specialists, a durable, high-quality product is created that is suitable for any hospitality, catering and institution.